Are longer video ads better than short ones?

Here is an interesting fact – The most-viewed ads on YouTube were all over a minute in 2014 and 2015. So is longer better?

In the past standard TV ad were 60 seconds long. But to bring more advertisers to the platform, Ad networks first offered 30-second ads, then 15-second ones to serve advertisers with smaller budgets. Ad length was a function of price, and not attention or effectiveness. Television ad research has established that 15-second TV ads are roughly 75% as effective as 30-second spots.1 And they’re half the cost. So it’s no surprise that 15-second ads are so common on TV, and that 60-second spots are few and far between.

It’s a different story on YouTube. Research has shown that there is a consistent relationship between how long an ad is viewable and increases in brand awareness and consideration. Viewers are willing to watch longer ads: The average length of ads on the YouTube Ads Leaderboard in 2014 averaged three minutes—an increase of 47% vs. 2013 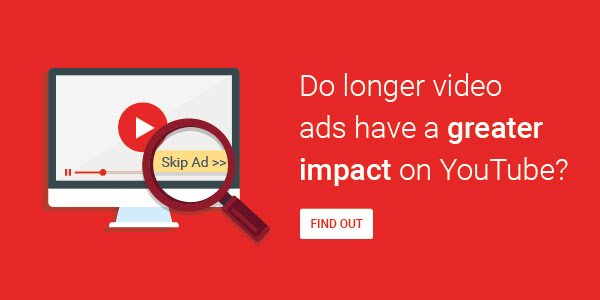