Tough Mudder is one brand that is seeing its Facebook Watch investment pay off.

The fitness brand has seen an average of 477,000 views on its 18 Watch shows. In total, the shows have generated more than 8 million views, according to Jerome Hiquet, CMO of Tough Mudder. 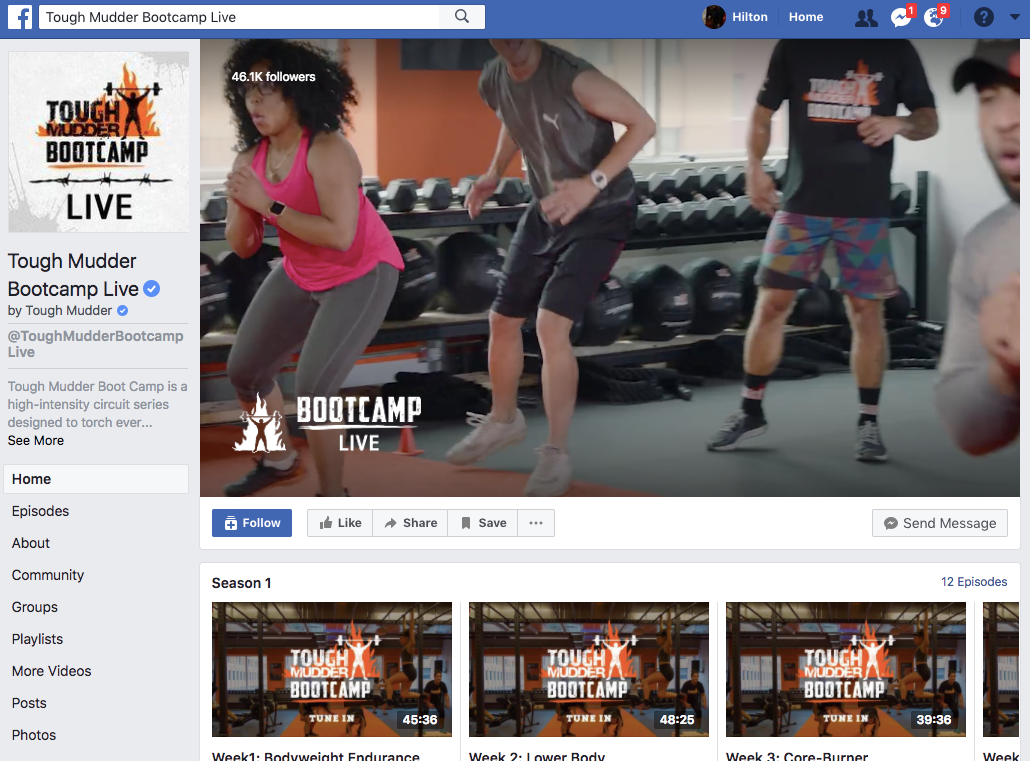 Hiquet calls the shows a “success” and said the number of views on Watch reaffirms Tough Mudder’s decision to put more focus on delivering its message of teamwork. “It’s videos consumers are seeking out,” he said. “The new generation wants to be connected to brands through emotion.”

The other series, “Tough Mudder Bootcamp,” is tailored to active lifestyle enthusiasts, who might feel more comfortable doing workouts from their own homes. In these weekly 45-minute live fitness classes, instructors walk viewers through different workouts.

The fitness classes are also meant as previews to Tough Mudder’s new boot camp studios. In February, Tough Mudder announced it would open its own line of workout studios in Massachusetts, Nevada and Texas in the Spring.

Tough Mudder began in 2010 primarily as an events company that hosted military-style obstacle courses where people run through fire, ice, electric fences and, of course, plenty of mud. Since then, it has evolved into a lifestyle and media brand that is not just for the hardcore athlete. Tough Mudder claims 3 million people have finished its races. To diversify its audiences, it had to diversify its messaging.

“The main point is to become more accessible,” said Hiquet.

Tough Mudder began building an in-house content team in its early days, but started to put more emphasis on doing so in 2015, said Hiquet, when the company realized this would help it be more cost-efficient. Today, Hiquet said the in-house content team is made up of 50 people between its New York and London offices. Out of those 50, 18 people focus on content and social media, and three people focus entirely on video. Hiquet added that Tough Mudder also hires several freelancers at one time to work on video content.

“We have a broad content marketing ecosystem from social media to TV, to ensure we can reach our existing and potential customers in multiple ways,” said Hiquet. Me WordPress Theme by themehall.com